Workers install the assembled hydrodynamic separator in the chamber. The construction crew assists with installation of the system. Workers had to excavate a 28-foot-deep pit to install the system.

The MWMO and the City of Minneapolis installed a stormwater pretreatment unit known as a hydrodynamic separator at the intersection of 35th Avenue NE and NE Tyler Street in the Waite Park neighborhood to help ensure the long-term functionality of the Northern Columbia Green Infrastructure project to the west (downstream). The system is designed to screen, separate, and trap trash, debris, sediment, and hydrocarbons from stormwater runoff.

As part of the Northeast Stormwater Management Initiative, the MWMO, the City of Minneapolis, and the Minneapolis Park and Recreation Board (MPRB) reached consensus in 2019 for the design of a project on the northern half of the Columbia Golf Course and Park that will increase flood resiliency, improve water quality, improve golf play, and restore habitat. Known as the Northern Columbia Green Infrastructure project, it will create improved drainage and water conveyance through new pipes connecting the reconstructed wet pond, the multi-use field basin, and the northwest basin. The wet pond and basins are in areas that would be difficult to access and maintain without disrupting golf and park operations. Therefore, the project partners agreed that placing pretreatment practices within the upstream stormpipe network in easy-to-maintain locations would be critical to the long-term functionality of the wet pond and basins.

The pretreatment project coincided with the city’s replacement of a stormsewer system on 35th Avenue NE, which made it the most cost-effective time to install a pretreatment unit. The city replaced an estimated 4,300 feet of stormpipe (35th Avenue NE from Central Avenue NE to Ulysses Street NE, and Tyler Street NE from 35th Avenue NE to 36th Avenue NE) with larger pipes to reduce surface flooding in the neighborhood. Manholes and catch basins in the project area were also replaced.

The pretreatment unit consists of a hydrodynamic separator, which is a system that uses swirl concentration and continuous deflective separation (CDS). A screen captures floatables and neutrally buoyant pollutants in a separation cylinder. Sediment settles into an isolated sump for removal (via vacuum truck hose) during maintenance. Stormwater moves under a hydrocarbon baffle to trap oils, and then the treated water exits the system via an outlet pipe. The pretreatment unit was designed to provide treatment of approximately 70 acres of drainage area upstream of the wet pond and basins, of which 65 percent is estimated as impervious area. The unit is expected to remove 80 percent of Total Suspended Solids (TSS) in the runoff from a 1.1-inch rainfall event.

An MWMO grant funded the equipment mobilization, erosion control, a diversion structure to route flows into the hydrodynamic separator, the pretreatment unit itself, and shoring necessary to provide safe working conditions due to the depth of installation. Clayey soils were excavated beneath the street to make a rectangular pit reaching a depth of approximately 28 feet. The prefabricated CDS hydrodynamic separator from Contech Engineering Solutions was lowered into the pit via crane in October 2020. The system includes six large concrete cylindrical pieces stacked together with holes for inlet and outlet pipes. The labor for installation was provided by the City of Minneapolis.

In addition to this pretreatment unit, one was installed at Central Avenue at the northeast corner of the Columbia Golf Course and two were installed near the intersection of 35th Avenue NE and 5th Street NE as part of the Northern Columbia Green Infrastructure project. Other potential locations for pretreatment are being evaluated farther upstream. 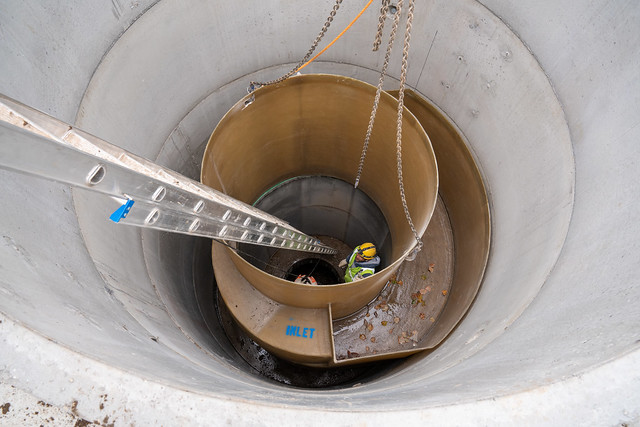