Partial view of a filtration basin near the stadium. Filtration basin under construction in October 2021.

The MWMO provided $500,000 to the City of Minneapolis to implement green stormwater infrastructure (GSI) in the area just north of U.S. Bank Stadium in Downtown Minneapolis. A combination of curb cuts, boulevard bioswales, and a large filtration basin will filter stormwater pollutants and help mitigate flooding in the area. The project is significant in that it is among the first GSI projects within the downtown core right-of-way.

The city planned to reconstruct the streets to replace the aging pavement and improve bike and pedestrian facilities. City staff also saw an opportunity to add GSI to help reduce flooding and filter pollution from stormwater runoff. A study revealed that the area offered ample boulevard space as well as under-utilized parking spaces that could be converted to green space with sustainable landscaping and stormwater management benefits. Property owners also expressed openness to the idea of creating more sustainable landscaping.

The redesigned streetscape features bioswales and a filtration basin to capture and treat the area’s stormwater runoff. Curb cuts direct runoff from the street into a series of boulevard bioswales. The bioswales were planted with salt-tolerant vegetation such as fox sedge, aromatic aster, and prairie dropseed so as to better survive the application of deicing chemicals applied to the streets in winter. The new filtration basin, located in the former parking area next to the bike trail, will capture and treat runoff from a total of 4.3 acres, removing an estimated 4.8 pounds of total phosphorus and 946 pounds of sediment annually. Numerous soil borings and soil testing were completed as a part of the planning work for this project. Due to nearby contamination, proximity to existing buildings, and proximity to retaining walls in the downtown setting, it was determined that filtration features are more desirable for this project than infiltration features.

GSI project components are along 10th Ave S and 12th Ave S between Washington and S 3rd St, S 3rd St between 10th Ave S and 12th Ave S, and a former parking area in the right-of-way located between Hiawatha Light Rail Transit (LRT) Trail and the corner of South 3rd Street and 10th Ave S. The intersection of 11th Avenue and 3rd Street has a long history of flooding that is problematic for adjacent businesses and for on-street parking. This project helps relieve flooding through a new drill-hole connection for filtered runoff from the newly installed GSI to the stormsewer system.

The new stormwater infrastructure will retain runoff from storms, reduce the burden on city stormsewers, and keep pollutants out of the nearby Mississippi River. The project’s stormwater features will be highly visible as they are located near U.S. Bank Stadium, the Guthrie Theater, and a number of downtown businesses. This will provide potential future educational and interpretation opportunities at the site. 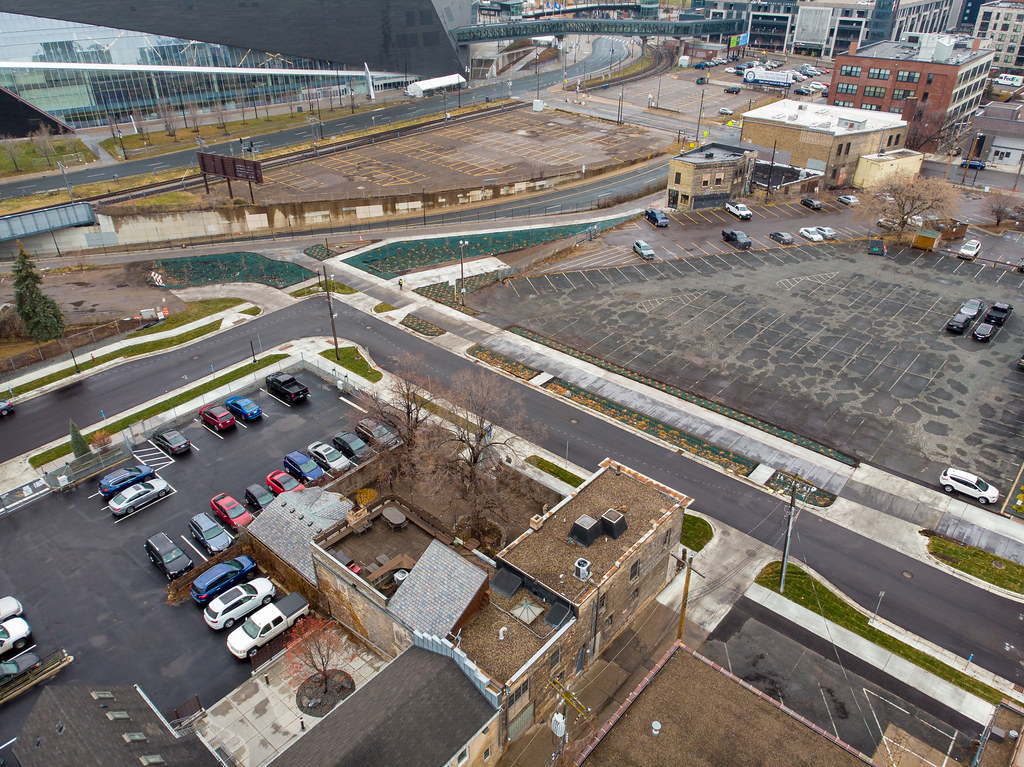