A cyclist passes by the new pollinator plantings. The slope prior to being restored. (Google Street View) Allina Health added native, pollinator-friendly plantings and educational signage to the grounds of its new transportation hub at Abbott Northwestern Hospital, in the Midtown Phillips Neighborhood of Minneapolis. The new landscaping covers a steep, 5,000-square-foot slope that borders the Midtown Greenway. An MWMO Action Grant supported design and installation of the new pollinator habitat, pollinator surveys led by the University of St. Thomas, and site interpretation and engagement opportunities.

Allina Health is implementing a multi-year infrastructure project at its Abbott Northwestern Hospital campus. As part of this project, a new “Transportation Hub” parking ramp is being constructed just north of the Midtown Greenway. Allina is pursuing sustainable landscaping goals for its renovated campus, and sought to improve the slope along the transportation hub, which was left untended by previous owners and had become overgrown with weeds.

The new landscaping plan is intended to provide habitat for pollinators and other small wildlife. Plants were selected by considering their attractiveness to pollinators, bloom time, and ability to grow well and prevent erosion on a steep slope. These plants include the following: purple coneflower, Muskingum dogwood, rough blazing star, Iroquois beauty black chokeberry, dwarf bush honeysuckle, butterfly weed, wild bergamot, golden alexander, and calico aster. These plants help intercept and slow precipitation and have much deeper root systems than turfgrass. They also need less specialized care and maintenance.

Allina Health is partnering with pollinator experts from the University of St. Thomas to measure the impact of the plantings on local pollinator populations. Biologists from the university reviewed and approved the planting plan, and will conduct pollinator surveys for at least two summers after the slope is reconstructed. Allina’s grounds crew will assume maintenance responsibilities for the plantings on the slope, including hiring contractors and specialists as needed to ensure the health of the plants. This project will serve as a model for how native, pollinator-friendly plants may be incorporated along other sections of the greenway and contribute to the creation of habitat corridors.

Allina Health plans to create educational signage to be installed around the Transportation Hub structure in locations which are visible to hospital and pedestrian traffic. These signs will inform the public about the plantings and other sustainable features of the hub, including the community solar garden on the roof and the stormwater management system (not funded by MWMO). The site is located along the busy Chicago Avenue and the Midtown Greenway and offers high visibility to both pedestrians and cyclists. Pending further discussion, signs may also be placed at Greenway level. As an additional educational component, Allina Health is currently developing a web page featuring this project to foster community engagement. The MWMO is assisting by providing access to its signage templates and reviewing draft signage. 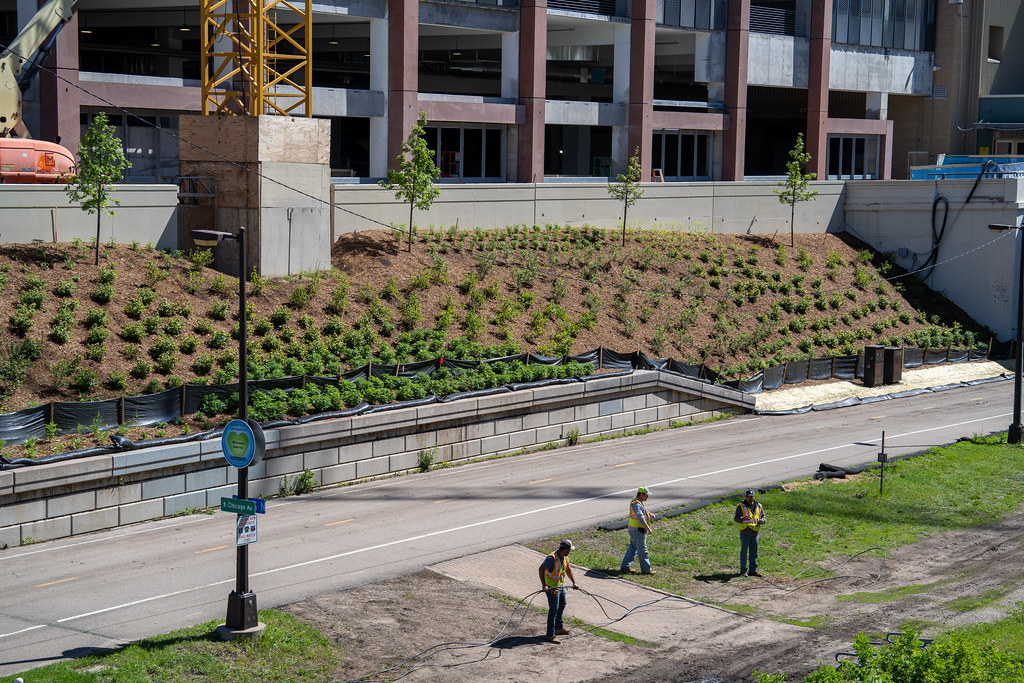