It’s that time of year when you cautiously place your warm winter sweaters in storage and head outside to soak up the sun. It’s never clear how long the sunshine will last; next week could include freezing rain. You ask yourself, “How long do I need to wait to put out the lawn furniture?” Plants, too, must strategize.

There’s a short period of time in early spring before trees fully leaf out and steal all the light. After snowmelt, the forest may appear brown and devoid of life. Along the bottomlands of the Mississippi River Gorge, the ground is spongy and cool with battered layers of leaves from past years. The last of the ice clings to the steep limestone and sandstone bluffs. It’s been many long months since most trees dropped the last of their leaves. Woodland wildflowers and spring ephemerals are eager to emerge. Many species of wildflowers can tolerate partial or complete shade and often flower later whereas the spring ephemerals need to complete most of their life cycle in early spring.

Spring ephemerals quickly bloom and produce seed before dying back and falling into dormancy before the trees obscure the sun. The Mississippi River Gorge is one of the best places to find spring ephemerals within the MWMO’s watershed. In an urban area mostly covered by hard surfaces like buildings and roads, the gorge offers a place to experience the wildness of the Mississippi River corridor.

Along the Winchell Trail, a five-mile hiking trail along the west side of the river between East Franklin Avenue and East 44th Street, a number of plants are already popping up. Virginia waterleaf (Hydrophyllum virginianum), a native wildflower with distinctive water stain-shaped spotting, is highly abundant and spreads readily. Later in the season, it will have small showy flowers (appearing in rounded clusters), which are highly attractive to bees in need of pollen and nectar. When available from nurseries, this plant can make a great groundcover for moist areas in your yard.

Unfortunately, you will also find the invasive garlic mustard (Alliaria petiolata) in the vicinity of the waterleaf. This non-native plant thrives in wooded areas, spreading rapidly and producing allelopathic compounds, which inhibit the growth of spring ephemerals and other native plants. In some areas, you may also find patches of Siberian squill (Scilla siberica), a stunning but invasive blue flower which has escaped residential gardens.

If you can take a hike in the near future, you may stumble upon a dramatic hillside display of bloodroot (Sanguinaria canadensis), which has white petals that only open in the sun and a cluster of bright yellow, pollen-covered stamens in the center — like eggs, sunny-side up. It may take two to three years for the plant to be ready to bloom. The flowers often emerge while the leaf is still unfurling and may last only a couple of days. However, after pollination, the newly formed seeds will have a fleshy structure called an elaisome, rich in fats and sugars. Ants collect the seeds, eating the elaisome but leaving the seed unharmed, thus aiding in dispersal. This plant is considered to be a spring ephemeral due to its short early spring bloom, but the attractive basal leaves tend to persist through the summer, particularly if there is dense shade. The fleetingness of bloodroot parallels the adult lifespan of mayflies (order Ephemeroptera); the nymphs may take up to two years to develop in aquatic habitats but then emerge and live only long enough to mate and reproduce (around a day).

Given the sensitivity and uniqueness of the gorge, many organizations including neighborhood groups, nonprofits, and government entities have been working to help protect habitat for the long-term through invasive species management and habitat restoration efforts. If you’re interested in getting involved, you can learn about how to become a Gorge Steward with Friends of the Mississippi River. You can also help out by picking up garbage and staying on the trail when possible to prevent soil erosion and damage to native plants.

No walk in the gorge will ever be the same as the last. One day you might see bloodroot. The next time, the last of the ice will have disappeared, Jack-in-the-Pulpit will have sent up its leaves and proudly display its spathe and spadix, and the tall deciduous trees by the river’s edge will have swallowed most of the light.

If you’re in a hurry, the well-used asphalt path along West River Parkway is a good starting point for your journey. (Directions to the trailhead) However, the un-paved portion of the trail is accessible from various locations along the parkway. Multiple staircase descents might just pull you closer to the high and clear piping calls of a pileated woodpecker, to a native plant just starting to a bloom, or to the Mississippi River itself.

You can find a map of the trail and some additional details here.

Update: Even More Wildflowers are Blooming!

It has been only a couple of weeks since we first posted about the start of the spring ephemeral and wildflower emergence season in the Mississippi River Gorge, but the forest floor is now exploding with new blooms while others are already fading away. For example, some bloodroot are on display (blooming period lasts about two weeks) but petals of individual plants fall off within a day or two of pollination by bees and flies and develop elongated seed capsules. Plan your next hike now!

A few species that are putting on a show right now include Canadian wild ginger, Dutchman’s breeches, Virginia bluebells, and large-flowered bellwort.

Canadian wild ginger spreads in large colonies and has dark red petal-like sepals lying close to the ground to try to attract small pollinating flies. This species is not related to the ginger plant often used for cooking. Like bloodroot, the seeds that develop will also have a fleshy and tasty appendage called an elaiosome, which attracts ants that carry it away while leaving the seed intact to germinate. This early spring bloomer will maintain above-ground growth through the summer.

Dutchman’s breeches has white to pink flowers that somewhat resemble a pair of pantaloons hanging upside down. The gray-green or bluish green leaves have a lacy appearance that stands out against the brown leaves of the forest floor. Its leaves will fade to a light yellow and die back during the summer.

Virginia bluebells, a true spring ephemeral, have trumpet-like pink, purple, and sometimes white flowers. Its gorgeous light green oval-shaped leaves will die to the ground by mid-summer as the plant slips into dormancy.

Large-flowered bellwort has bright yellow, elongated bell-shaped flowers. Notice the long perfoliate leaves (leaf completely surrounds the stem). This can help distinguish the plant from Solomon’s seal, which appears similar in early spring before it flowers but does not have perfoliate leaves. Large-flowered bellwort blooms in early spring but is not a spring ephemeral; its leaves and stems persist through the summer months.

What spring ephemerals are you seeing in your favorite natural area? Post a photo on social media and tag @mississippiwmo in the description! 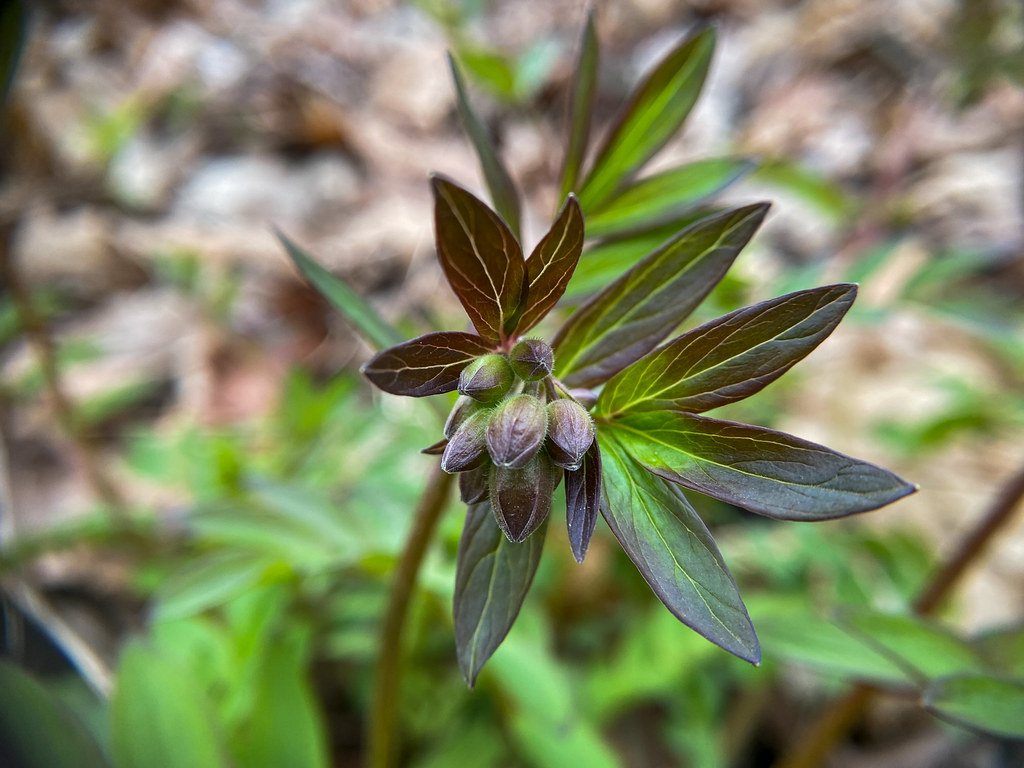