A view of Upper Harbor Terminal's riverbank in June 2022.

The MWMO is providing a $2.6 million grant to the Minneapolis Park and Recreation Board for shoreline and habitat restoration work at Upper Harbor Terminal (UHT). The funding will be used to regrade the slope along the Mississippi River shoreline and establish a variety of vegetation, including native plants and oak forest. Funds will also be used for a pedestrian overlook feature that will allow future bike and pedestrian trails to be routed in a manner that minimizes disruption to habitat.

Overall, the project will convert more than four acres of riverbank deeply impacted by decades of industrial use. By removing invasive vegetation, re-grading the riverbank, preserving healthy and mature trees, stabilizing the riverbank with perennial and diverse tree plantings, and dedicated operations and maintenance, a restored riverbank habitat will emerge.

The project represents the first of several anticipated MWMO grants for stormwater and habitat improvements at the UHT site, which is being redeveloped in phases.

Upper Harbor Terminal (UHT) is a 53-acre former industrial site located along the west bank of the Mississippi River in North Minneapolis. The City of Minneapolis owns the site and is redeveloping it into a combination of parkland and commercial and residential space. The MWMO joined in a multi-year planning effort with the city, the Minneapolis Park and Recreation Board (MPRB), and private developers to transform UHT and reconnect North Minneapolis to the riverfront. The MWMO’s goals for UHT include providing large-scale (district) stormwater management, maximizing habitat creation with continuous habitat corridors, restoring the shoreline, and increasing public access to the river.

MPRB is developing a new 19.5-acre park that will span the length of the riverfront at UHT. This represents the single largest addition to the Minneapolis parks system in decades, and a significant step forward in realizing the goal of an interconnected parks and trails system along the riverfront north of St. Anthony Falls (as envisioned by RiverFirst and the Above the Falls Regional Park Master Plan).

You can learn more about Upper Harbor Terminal and its history at the City of Minneapolis website.  For information about the new park and concept plan, see the MPRB website.

The $2.6 million Capital Project Grant from the MWMO will go toward several site improvements at UHT, including shoreline and habitat restoration and a pedestrian overlook.

Much of the riverbank at the site is currently steeply sloped and unstable. In fall 2022, portions of the slope to the river will be regraded to be more gradual, which will support the establishment of diverse native plant communities, including oak forest. Excavated soils will be sorted on-site, and clean soils will be used for future redevelopment of Graco Park located down the river. The regraded slope and plantings will prevent the loss of shoreline, stabilize the riverbank soils, and restore habitat along the Mississippi River Corridor Critical Area (MRCCA).  The regrading will also create opportunities for people to walk down and access the river.

Construction of a pedestrian overlook and ravine restoration is planned for late 2023–2024, and will be located across the river from the heron rookery.  The overlook will span a ravine and allow bike and pedestrian trails to be routed in a manner that provides better habitat and stormwater connectivity along the new parkway. The overlook will also serve as a headwall to a restored riverbank ravine feature and pipe overflow from a portion of a future district stormwater system.  In addition to habitat and stormwater benefits, the overlook presents an opportunity for art and interpretive features that were previously identified through community engagement.

Currently, most of the UHT site is non-vegetated, and the areas that are vegetated contain a significant amount of non-native and invasive species. The possibility of restoring these areas presents a once-in-a-lifetime opportunity to return a large section of Mississippi River corridor to a diverse and thriving ecosystem. 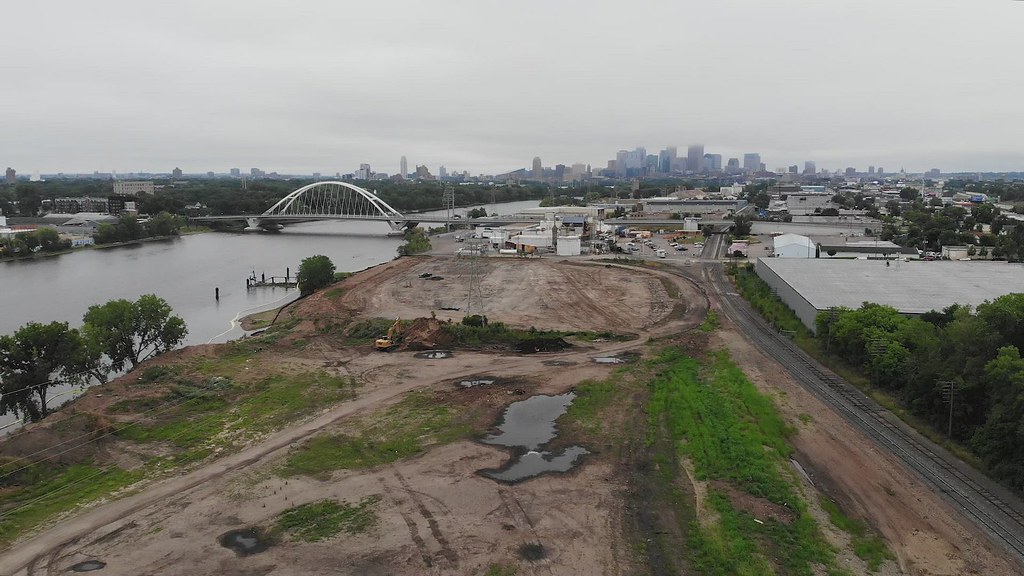 Minneapolis Park and Recreation Board