A worker uses a skid loader to excavate sediment. A worker uses a crane to lower a skid loader into the tunnel. Sediment drying prior to being moved off-site and disposed of. Staff from the City of Minneapolis, MWMO and Minger Construction examine the tunnel.

The MWMO is working with the City of Minneapolis to remove decades’ worth of accumulated sediment and debris from the Old Bassett Creek Tunnel (OBCT), which runs beneath Downtown and North Minneapolis. The multi-phase project is designed to prevent accumulated sediment and its pollutants from being mobilized and flushed into the Mississippi River. This first phase of the project, completed in 2018, removed 935 tons of sediment from a 1,080-foot section of the tunnel.

Constructed in the early 1900s, the OBCT was built to convey water from the historic Bassett Creek to the Mississippi River. A new tunnel was constructed in the 1970s, and the OBCT now conveys flow from Bassett Creek only under heavy rains and high (stream) flow conditions. The MWMO has been working together with the city since 2012 to study and ultimately remove the sediment from the tunnel. You can learn more about the project background and the investigations of the pollutants in the tunnel on our planning initiative page.

This Phase I project helped the city understand the best methods for effectively and efficiently cleaning out the OBCT while minimizing costs and any disruption to nearby residents, businesses, and pedestrians. The Phase I segment lies within the Harrison and Sumner-Glenwood neighborhoods of Minneapolis and extends 1,080 linear feet from 2nd Avenue North (tunnel inlet) to just south of 4th Avenue North, where a street reconstruction allowed the city to create a 10-foot-by-14-foot access point to the tunnel in 2018. Because an access hatch was created, gaining access to the tunnel only required excavating a layer of roadway bituminous and removing concrete slabs from the top of the tunnel. Years of inflow from Bassett Creek, as well as other incoming stormwater pipes, led to the deposition of a large quantity of debris and sediment onto the floor of the tunnel. Sediment depths within the Phase I segment, as measured by Barr Engineering and the MWMO, ranged from 1 foot to 1.5 feet on the tunnel’s invert floor.

The Phase I cleanout was completed in the summer of 2018 with support from the MWMO’s capital funds. Minger Construction Company performed the work with oversight from the City of Minneapolis Public Works Department. Over the course of 10 days starting on June 20, 2018, the contractors removed, dried, and disposed of 935 tons of sediment and debris at an approved landfill. Skid steer loaders and a walk-behind excavator were used to move the sediment towards the access point of the tunnel. The material was then loaded into a back-hoe bucket and brought to the surface. Sediment was then place into a containment area constructed of jersey barriers that allowed for water to decant from the sediment before being hauled away. At least two significant rainfall events during the time of the clean-out added to the complexity of removing the material. By-pass pumps and hoses were used to move as much water as possible downstream of the cleanout segment. Silt fencing helped slow the discharge and allow sediment to settle out of the water. After removal, sediment was stored above ground for at least 24 hours to allow dewatering before off-site disposal. 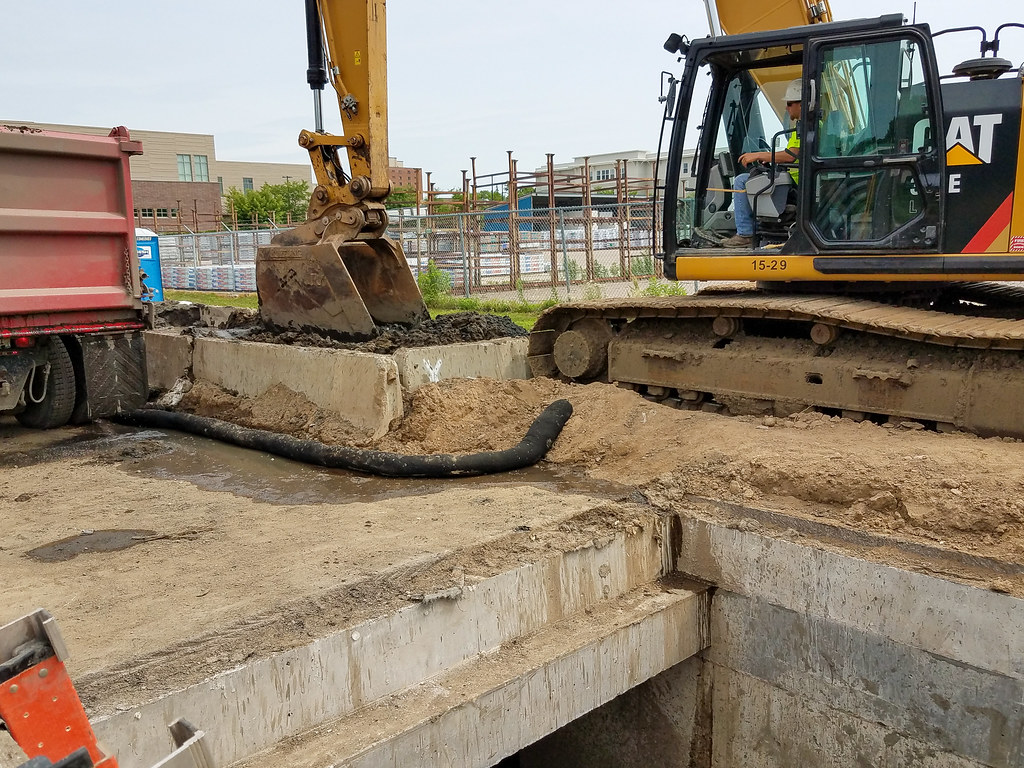