Habitat restoration work is underway at Columbia Park and the northern part of Columbia Golf Course. Workers from Landbridge Ecological recently finished removing invasive woody species in preparation for native seeding in the spring. The most prevalent species was European Buckthorn, a shrubby tree that was once commonly used as hedges but escaped from yards long ago. Invasive species like buckthorn crowd out native plants and degrade wildlife habitat.

It’s important to either remove or burn buckthorn, because this species has toxic compounds that can alter soil properties in the long term and also directly inhibit the germination or growth of other plants. The invasive woody vegetation was cut at the base and the stumps were treated with an herbicide to curtail regrowth. This work was completed without large equipment; only chainsaws, trimmers with brush cutting heads, pruners, and loppers were used. For this project, controlled burn piles were approved to minimize hauling on the site; this reduced impacts to active recreational routes, such as the groomed ski path, and the need for seeding to restore potential rutting or other soil damage. 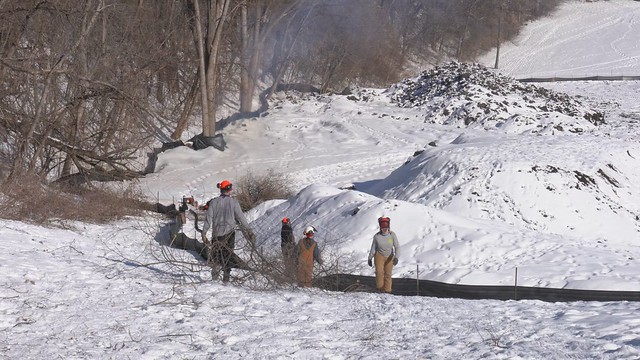 Examples of other invasives targeted for removal include Siberian Elm, Norway Maple, and various non-native honeysuckles. In some cases, selective removal of some aggressive native species, such as Boxelder, was needed to open up the canopy and allow light penetration to ensure success of native understory seeding. Winter is a great time to remove woody invasives because it’s easy to see the target species and there is less risk of damage to other plants and soil when the ground is frozen.

Removal of herbaceous invasives like garlic mustard will be conducted prior to native seeding in the spring. The seed will enhance woodland and oak savanna areas. Some areas did not need woody invasive removal, but will be planted with native seed to provide a water quality buffer or new short or tall grass prairie habitat. In total, 19 acres will be enhanced or restored!

This restoration work is part of the North Columbia Golf Course and Park BMPs project. You can learn more about the project and see design plans on our recently updated project page.